Poverty Census (first ever in the country)

Cash Transfers (largest ever in the country)

Waseela-e-Haq (first ever in the country)

Waseela-e-Rozgar (largest ever in the country)

Giving identity to the Marginalized Women

Technology based Payments Mechanisms (first ever in the country)

Transparency, the Hallmark of BISP

Transparency, the Hallmark of BISP
Transparency, objectivity and efficiency in service delivery are a hallmark of BISP operations and both international financial institutions and donor agencies have shown full trust and confidence in it. An evidence of international recognition of BISP is the technical and financial support received from international development partners including the World Bank, ADB, DFID, USAID and governments of Iran, China and Turkey. BISP has used technical and financial support in the most effective manner and has ensured the implementation of an across-the-board transparent regime. Transparency and objectivity of BISP operations is considered unparalleled by multilateral financial institutions and international donors for the following reasons:

Countries like Mongolia, Cambodia, Nigeria, Bangladesh, Ghana, Palestine, Mexico and even India have shown willingness to learn from BISP’s experience and replicate the BISP model in their countries.

BISP Payment Grievance Redressal System
BISP has designed a comprehensive payment redressal system which is in development and test phase and will be available online for our beneficiaries. The system will enable them to resolve the issues on real time and just in time (JIT) basis. The systems will enable BISP and its partner banks to locally manage payment complaints.

Emergency Relief Package
BISP’s mission is to support the citizens of Pakistan and to be the first responders to ensure that as a nation we work together to build, sustain, and improve our capability to prepare for, protect against, respond to, recover from, and mitigate all hazards in case of any emergency. BISP’s major Relief Packages are for:

Bomb Blast Victim
Pakistan has suffered more than any other country in the world in global war against terror. Bomb blasts and incidents of terrorism have increased in the country especially in Khyber-Pakhtoonkhwa and have claimed thousands of precious lives. Thousands have either been killed, disabled or have sustained injuries. Keeping in view the situation, the government has decided to compensate the civilian affectees of terrorism from BISP, being main social safety net programme. The affected families are offered a monthly cash grant of Rs.1000/ month.

Indian Held Kashmir Refugees (IHK)
In pursuance of BISP’s proposal to extend cash grant of Rs.1000 to each family of IHK refugees and subsequent approval of Prime Minister of Pakistan to this effect the program’s inception was initiated.
BISP acquired the complete details of refugee families from Relief & Rehabilitation Department AJ&K, since such families are already registered with the R&R Department. Based on this data, BISP initiated complete survey of refugee families through its regional offices in AJ&K. This survey was done by visiting the refugee camps and by visiting each household one by one.
In total 5250 IHK refugee families are living in 33 camps across 5 districts of AJ&K namely Muzaffarabad, Bagh, Kotli, Mirpur and Poonch. The female head of the family is the beneficiary of this initiative. Each IHK Refugee family will be paid Rs. 1000/month through various banks operating in AJ&K.

IDP Swat/Malakand
During the military operation which was launched against the miscreants in Bajaur, Khyber and Mohmand agencies, Malakand Division and South Waziristan, a large number of families were displaced from the area. These families shifted to the nearby districts of Khyber-Pakhtoonkhwa. Though a majority of these temporarily displaced families have returned back to their areas, a need was felt to compensate them in the form of cash assistance for a limited period of time. BISP on the instruction of the government of Pakistan has extended its monthly cash assistance to these internally displaced families as well for a period of one year only.

IDP Bajaur/Fata
A military operation was launched by the Military against the miscreants in Bajaur and the adjoining agencies of Khyber and Mohmand in December, 2008. The operation has displaced a large number of families in the area. These families shifted to the nearby districts of Khyber-Pakhtoonkhwa. BISP on the instruction of the government of Pakistan extended its monthly cash transfers to the IDP families as well.

Earthquake Victims
Government of Pakistan decided to extend relief under the Benazir Income Support Programme (BISP) to the earthquake affected districts, namely, Pashin, Ziarat and Loralai of Balochistan. This relief was provided in the form of Emergency Relief Package (ERP) i.e.Rs.1000/- per family per month with retrospective effect from October,2008.The Provincial set-up of BISP oversaw and coordinated implementation of the ERP in Balochistan 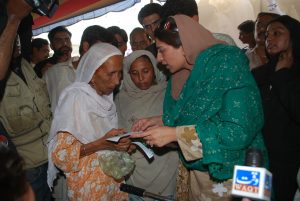 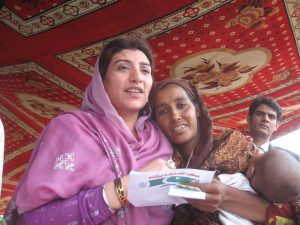 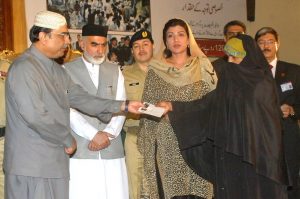